This past January 27 we held the first music speed challenge at Soapbox. Participants had to compose an original piece of music from scratch, from start to finish, in less than one hour, and winners were determined by who finished first (see below for the fine print). It was a really great time - thanks for everyone who came out! I was also surprised at how difficult of a challenge it really was. The first half hour you think you are fine and then next thing you know there are only 3 minutes left and you are scrambling… I found out my biggest enemy was myself, and that there is a large time penalty for not being decisive enough. If you spend your time tweaking a snare hit for 45 minutes or trying to decide on what kind of piano sound to use, you won’t have enough time to actually write the song. I think these kind of creative games really force you to produce results and overcome mental blocks - zero room to procrastinate. I definitely think we’ll be doing this again so don’t miss the next one!

Here are the official race results, and a mix of all the songs submitted: Music Speed! Results Mix 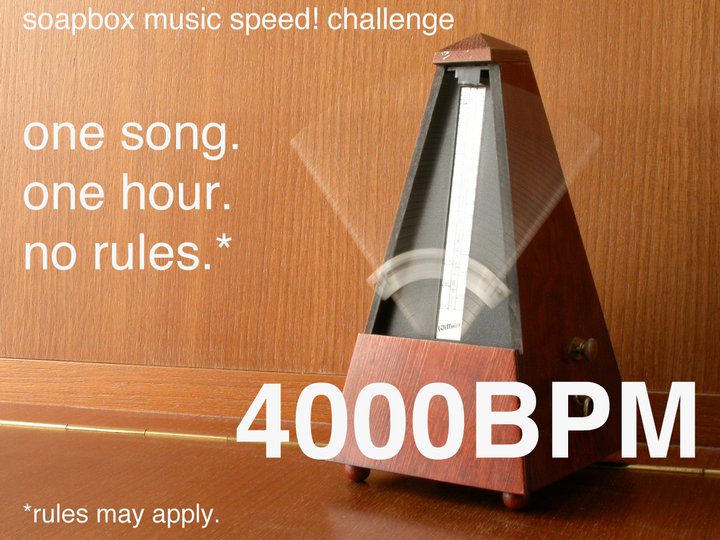 Can you or your team complete an entire song in under one hour?

RULES: Make a complete song, starting from scratch, in under one hour. Song must be between 1-2 minutes in length. Must be at Soapbox to participate. Finished song must be in a recorded form. Collaborations are allowed (you can form a team, work solo, or both). Submissions can be challenged.** Music must be made and monitored only with headphones (for instance a laptop or electric guitar with headphone jack). Everyone will be in the same room - it could get crazy. It could get noisy. You might yell at the person next to you. You might cry. You might have a nervous breakdown. People might start forming alliances against you. Your collaborator might be a double agent. This may be the single most intense experience of your life.

PRIZES: First team to finish gets to choose pizza toppings. Second team gets to give the first team a high five. Third team must congratulate first person in haiku form and serve the first place person the first slice of pizza. Remaining slices will be served with priority going in order of placeholders.

** Another team can challenge a submission if they think another team’s submission was suspiciously fast, too lazy, or they just want to stall for time. As soon as a team submits a track, a rival team has a total of 15 seconds to challenge it and put it to a majority vote. If a majority rejects the submission then the offending team is penalized and can’t submit again for another 2 minutes. If a team is caught abusing the challenge system by attempting multiple challenges in a row, they themselves can be challenged and the penalty if the majority agree is 5 minutes in the box.