Orange Drink is a band of many faces and configurations. It’s self-described by member Drew Fernando as a collective; members come and go leaving imprints like memories, chugging forward like a train at full steam with no intention of stopping. Depending on when you hear them they might sound like a folk rock band, the next minute a noise group, and then at the end of the night they’ll be bumping electronic dance music. Their vaudeville style performances are equally eclectic and can feature electronic manipulation, breakdancing, puppets, performance art, comedy routines, horror soundscapes, as well as a standard rock setup. 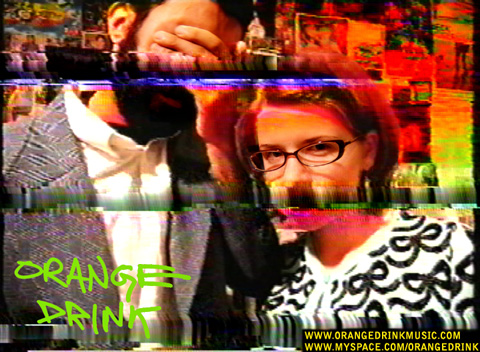 It’s a band that enjoys contradictions, enjoys radical inclusion that tests your palette, and treats the journey like a documentary crew documenting itself. This type of challenge to norms and self motivated spirit is reminiscent of a punk aesthetic: “We do it because we like it. We do it because we can. Join us!”

Currently Orange Drink is raising funds to release their next album on Kickstarter. As part of their campaign they are offering 3 hour bookings at Soapbox as an option when donating. For a limited time, if you chose this option we will actually double this amount to 6 hours. We support local music, and you should too!

Soapbox: A brief history of the band name and how it formed?

Drew Fernando: I got involved with Orange Drink around 1992 in Virginia Beach, VA when I was learning guitar and drums and experimenting with 4 track cassette recorders. The band was formed around the concept of having fun and exploring the world of sound and music.

Soapbox: When did you first realize you wanted to pursue music?

DF: I don’t know if there was a definite realization point, but it is more like a lifelong dream that I am slowly turning into reality every day. It seems like every year we take bigger risks and work harder to make steps towards our goals. It never felt like a decision to enter a career field; it feels more like coming out - you can either admit that you’re an artist or deny it. So I’m trying to stay true to it and follow the dream.

Soapbox: Orange Drink is self-described as a collective. What does that mean?

DF: It means that this isn’t a typical band situation that has set members that perform certain roles. Some people only contribute visual art, others are involved in production, others perform live - people come in and out. It’s less about the particular people involved and more about the diverse world of Orange Drink, through video, music, performance, dance, art, etc. The OD crew rolls deep!

Soapbox: Your new album Minotaur is 8-bit inspired instrumental dance music. It’s a radical shift in style from your previous album Narcolepsy, which consisted of lyric-driven experimental folk songs with live instrumentation. Can you shed some light on this shift in style?

DF: We love many different styles of music and the plan was always to explore whatever we found intriguing or exciting. With only a few releases the contrast seems pretty stark, but 10 albums down the line the many phases of the Orange Drink multiverse will maybe make sense. Some of the songs on Minotaur were actually started while Narcolepsy was ending. It served as a refreshing break to get away from guitars and singing for a bit and focus on something completely different. Another element that influenced Minotaur was our living conditions. Living in apartment complexes in the city was not conducive to guitar feedback noise sessions. Laptop computers and portable electronic devices were a way to compose music, easily travel to performances via public transportation, and keep the neighbors happy. But don’t worry kids, we’re still going to make the guitar feedback noise album!

Soapbox: How has this change in style affected the songwriting process? Is it hard to express emotion without using any vocals or live instrumentation?

DF: The portability is nice. You could go on vacation and work on tracks, or go to the library for a change of scenery. The infinite possibilities of computer editing made composition a little tricky. The live performance found us mixing elements on the fly, depending on our mood and the audience’s reaction. But for the album, it was a little daunting to know where to start. Ultimately, our live performances allowed us to test drive certain arrangements and get instant feedback. If they go “OH SNAP THAT’S TIGHT!” it’s good; if they go “Hey, you guys wanna head out?” it’s not so good. If they go “THAT’S WACK!” it’s wack, unless they themselves are wack, and then it’s awesome…

I don’t think it is hard to express emotion without vocals or live instrumentation, but I think it is a little harder to communicate singular ideas or concepts. During the final weeks of production of Minotaur, a lot of the meaning and the storyline of the album appeared after the fact. Instead of writing with a clear intention, it was written and arranged with a lot of good faith and enthusiasm for the sound in the music, and then the meaning was uncovered after the fact. I’ve heard dance music that has tons of energy and creativity, but maybe not too much that was emotional or intellectual. It’s a delicate balance, because you want to dance and lose yourself in the music, and you can’t do that if you are trying to think about how sad you are or how the hi-hat is reversed every 7th and 13th time and how that represents The Great Bluedini’s struggle. So hopefully listeners will find that Minotaur is something that you can crank up, dance, break out a sweat, and maybe sprain your back to. Also Minotaur is an album that you can sit down and listen to, think about, and let the story play out in your mind…you can choose whether to get lost in the labyrinth or try and find the Minotaur.

Soapbox: Your street team uses a variety of approaches to get the word out - your website, facebook, kickstarter, street flyers, demo cds, promotional shows, parties, and more. Any words of wisdom for musicians/artists new to the scene here in Chicago? What’s worked well and what hasn’t?

DF: Finding out exactly how your fans want to be contacted is something that we’re still working on. Some people check their email everyday, other people forget about shows unless it appears on their smartphone, others catch the news on social networking sites, other people check the official website everyday. We use the variety because we try to make it convenient for people to catch the latest news on shows, videos, new products and releases. Giving out free stuff in exchange for e-mail addresses has helped build our contact list. Hopefully people who would have otherwise forgotten can get a reminder and watch our fun videos and listen to our music online. Also making friends with bands you play shows with has worked because, one, you make new friends and that rules, and two, it seems like venues are more likely to book you if you can promise them two bands that will bring fifty people rather than one band that will bring twenty five people…you know, so they can sell them alcohol.

Complaining has never worked, neither has being rude to people. Other than that, just being ready for any opportunity and loving what you do despite the lack of opportunity has been a helpful ideology. Playing, writing, and recording is fun and we’re just going to have fun. We’ll put in the work to try to perform for larger audiences and be compensated, and if that opportunity comes we’ll be ready, because we’ve put in the work, but if it doesn’t, we’ll still be having fun.

Soapbox: Your live show incorporates performance art, breakdancing, puppets, and other theatrical devices. What is important to you when you perform live? What do you want the audience to walk away with?

DF: It’s important to me to be honest, be creative, work hard, and put all of my emotion into a performance. I want the audience to have a great time, and maybe have their artistic horizons broadened. I want them to feel energized and maybe even inspired. I’d like to show them something they’ve never seen before. I also want the audience to walk away with melted faces. “Dude, that Orange Drink show was crucial.”

Soapbox: What is the band’s favorite local venue?

DF: Reggie’s Rock Club and Music Joint. They have one of the best veggie burgers and great soundsystems. I like how they have a music venue, a record store, a bar, and a restaurant all in the same building. With all those different things, it is a refreshing change of place from venues where the only options are drink alcohol or not. It makes me feel like they care a little bit more about music than your average venue. They also treat their performers very well and have been very good to Hemlock Records & Orange Drink.

Soapbox: Any future projects or shows?

DF: The Minotaur Kickstarter project ends this Friday. After that, we’ve got 2 more albums coming out, one that is closer to singer-songwriter indie rock and another that is closer to experimental noise. And our next show is January 21st at Leland Tap at 4662 N Western Ave.