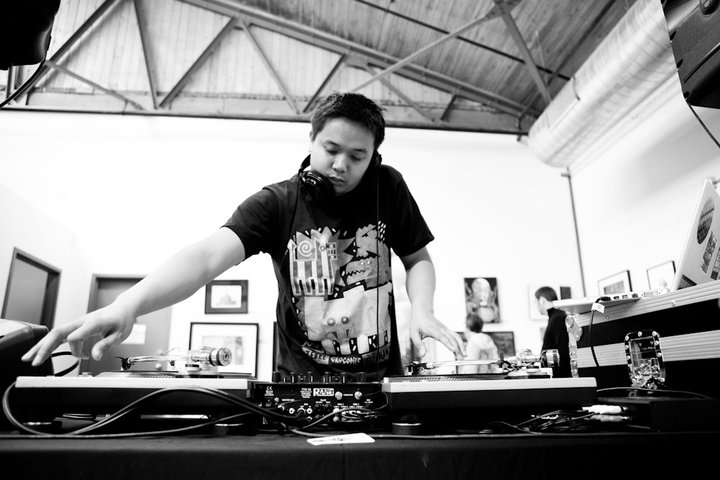 Victor Carreon, aka DJ Limbs is probably the hardest working DJ in Chicago. He’s got a consistent stream of regular gigs all over town, is always up for even the smallest side gigs, and even organizes charitable fundraising gigs to help others. When he isn’t playing out, he’s staying in and working on tracks, researching or building the next piece of gear in his arsenal. His day job is working on sound design - it seems that every aspect of his life involves soundwaves. He recently won the Vocalo remix contest and is a regular contributor to IPMM. You can find him posting about pizza and music on his personal site, djlimbs.com.

I first met Limbs when he got involved (and later ran) UC Hiphop down in Urbana-Champaign. We caught up with him between gigs for a quick interview.

Soapbox: What kind of music did you listen to growing up?

DJ Limbs: First it was whatever my older sisters were listening to, which was a lot of new wave, RnB, 80s boy bands and other pop acts. I got into Michael Jackson at an early age and listened to all his albums. While I was living in Switzerland I watched a lot of MTV, and the European Top 40 usually had really dope house joints.

Soapbox: How did you learn how to DJ?

DJ Limbs: Copying videos, internet and a lot of practice. There weren’t any other DJs to build with in my early years. I benefited a lot when I got to college and got to work closely with some really talented folks.

Soapbox: What is your creative and/or technical process when approaching a remix?

DJ Limbs: When an opportunity comes up, I usually have a few beats in the works already so I might go back to pick and choose elements from works in progress and see how they fit. If nothing’s sounding right, I’ll make something new. I pretty much hack at it until something I like comes out. Having an acapella to build around helps speed up the process.

Soapbox: How do you stay on top of all the fast changing technology out there?

DJ Limbs: I follow the CreateDigitalMusic and SoundOnSound blogs and lurk the forums for the software I use - Ableton and Native Instrument plugs for the most part. I also read Future Music, Computer Music Magazine and MusicTech when I’m in a bookstore. I like music tech, but for the most part I’m really just looking for something that fits my ideal vision of a music making workflow. Still haven’t found it!

Soapbox: DJing vs production vs sound design. What’s the difference?

DJ Limbs: I think it’s how much I zoom into things. In DJing, I’m zoomed out the most, thinking about the vibe of a large space over a long period of time. I build the vibe with full songs or looped grooves. DJing is also a performance where I’m interacting directly with an audience, so I think about the visual presentation as well as aural. In production I’m zoomed in a bit more. I get to build tracks by layering smaller elements of music like drum loops, sample snippets and melody lines. I focus on how to create and develop a mood and idea in a shorter period of time. I also sometimes think about how to sequence the track so I can use it when DJing. I feel the most stuck to a rhythmic grid in production. In sound design I’m zoomed into the waveforms of the noises we hear. Sometimes I’ll build elements for music, sometimes they’ll just be bizarre sounds. I think about timbre, volume, length, frequency spectrum and what images/emotions sounds evoke. It’s easy to get lost in sound design.

Soapbox: What advice would you give to DJs just starting out?

DJ Limbs: Figure out why you really want to DJ. Learn your history. Research gear. Peep your local scene and seek out peers for advice but don’t go overboard on the networking. Mentors are good, but not always necessary to grow. If you practice to the point that your vision is blurry, you’re on the right track to some technical illness! Listen to as much music as you can but build your collection slowly and try to pick only the tracks you really love. Get a Soundcloud. Follow labels, your favorite artists and stores/distributors more than blogs.

Soapbox: What sort of music are you listening to now?

DJ Limbs: UK funky and grime beats that have elements of Juke, RnB and cool sounds. Electronic dance stuff coming out of South America and other parts of the world. I’m always digging into world, soul, reggae and psychedelic breaks from the past. The future-head nodding stuff ala FlyLo and fam still comes up in my playlists. I keep my ear out for the new indie dance/pop stuff for gigs I do, and I like some of that stuff too. Deep house. Hiphop of course, but more 80s-early 2000s than the most recent stuff except for a few MCs. I’ve been digging into the section of post-punk that has a real dancey almost disco/almost break drums + stripped down bassline/guitar riffs and mad fun + energetic vocals.

DJ Limbs: In the mainstream, probably louder and more offensive with elements jacked from the 90s. In electronic stuff, I think the sounds and rhythms will continue getting more organic. 150 BPMs might be a bit more of the norm in dance music. More genres will cross pollinate. The breaks and 808s will still be there!

Soapbox: Thoughts on the Chicago music scene? What would you like to see happen?

DJ Limbs: There’s a lot of talent in Chicago and a lot of pockets of different scenes. I’d like to see myself get more involved and see them intertwine more.