Originally from Detroit, Raj “Mahal” Malosh is a producer now bringing that Motor City soul to Chicago in the form of futuristic & experimental beat production.

I first heard about Raj Mahal through our good friend DJ Limbs (who always deserves a shout out, check him out). The words experimental, hip-hop, and live beats sorta grabbed my attention and after checking out some tracks on his soundcloud I found myself putting them on repeat. Then one of Raj’s tracks (Fenkell Ave) got stuck in my head for a day and a half, so I figured I should probably find out more about him. What I like about his tracks are the subtleties, the understated gated kick/snare swing and really minimal tweaks of a sample over time to get you to see it from all sides. It’s difficult to balance the hypnotic, circular, and minimal, but still provide the necessary squeeze-your-eyes-tight-and-nod-your-head-with-your-hands up soul that brings it all together.

We originally wanted to film a little bit of Raj in Soapbox showing us a demo of his live setup, but due to time constraints it didn’t work out. Hopefully we’ll be able to catch up again soon and in the meantime you can find Raj Mahal at Lokal for Push Tuesdays, Beauty Beats at Beauty Bar, and as guest on Cutz on Cuts. Here’s a recent mix he did for Vocalo.org as well.

Soapbox: Can you describe your earliest musical memory?

Raj Mahal: My earliest substantial musical memory happen to be when I heard Egyptian Lover at maybe age 5 or 6. I was riding with my family in the car and it came on WJLB FM 98 in Detroit. That was when I fell in love with hip hop and music in general. WJLB became my main source for music from then. Although I didn’t know it at the time but there was something about the synths and and the arabic tone that made me really intrigued. From then on I was always drawn to that particular sound.

S: What kind of music did you listen to growing up?

R: Growing up I stuck with mostly hip hop. I remember my sister saying that the music was a fad and of course I disagreed. But my family was into music in general. Motown, blues, pop, reggae, and soul were always around in my house. Stories of my dad running around with and learning guitar from John Lee Hooker would entertain me.

S: How did you first get involved with DJing and beat production?

R: I got involved with DJ-ing kind of by mistake. I never had thought too much about it aside from playing tapes and CDs at friends parties until I was about 18. I was at a friends house who had two janky turntables and a radio shack mixer. I tried it out and blended two beats.I felt like I was being creative and saw doing that was like creating a new song. I then found a new respect for the DJ and wanted to become one myself.

As far as production, I had been wanting to make beats since about 8th grade. I never really thought that I could even though I would do the play, pause and rewind beats on cassette tapes. I definitely had an affinity toward instrumental hip hop. I was the type to listen to the beat first and maybe hear the lyrics later.

S: Can you describe your songwriting process a bit…from idea to execution?

R: When it comes to songwriting I have many different processes. I am a sample head. I have always loved the hard drum and sample sound. I try to to keep that as pretty much my main formula. But I also play guitar and know a little music theory so I figure stuff out on guitar usually and expand from there.

S: “Fenkell Ave” is probably one of my favorite tracks - is that named after a street in your hometown of Detroit?

R: Thats right. It is technically 5 mile road in Detroit. Peeps say 5 mile and you know that they’re talking about Fenkell. It is deep in the city and I would feel it’s pulse being there. So that title was a summation for me of Detroit the pretty and ugly mixed into one.

S: In your opinion, do you think music inspiration originates from a) your heart & soul, b) ideas floating around us and plucked out of thin air or c) cosmic rays beamed in from a faraway galaxy (possibly including alien transmissions)?

R: I think the key to answer this question is in the word inspiration itself. If you break it down “in spirit” is what you get. Spirit is where I feel that I derive my creativity be it good or bad. But I am a spiritual cat so I try to hone good spirit and strength. Next would be heart. If I don’t feel something I make it seems 9 times out of 10 others won’t either. Last would be brain for getting things to fit right so to speak.

S: “Tired of You” has an awesome dry, staccato, stark vibe. Who are you tired of?

R: That was made at a time when an ex- girl wouldn’t leave me alone. I felt trapped. I found solace in being locked in my room and making that beat. It was also a measure of me moving into the music world from the reclusion that I was in and tired of.

S: Can you name a few favorite musicians or producers, dead or alive?

R: Of course J Dilla. He was and continues to be a hero to me. He was the one in Detroit that took on this ethos that embodied what good music was and is for me AND he was from Detroit. So he was a super influence. very much love and appreciate what he did for hip hop and music in general. But outside of him James Brown, Fela Kuti, Augustus Pablo, Curtis Mayfield, and Can.

S: Can you explain a bit about Push Tuesdays at Lokal?

R: It was started by my man Adam (Abyss) who I was talking with about getting something together with and he brought in a couple of other guys (Cos and Illiac). We all have similar taste in music so Abyss got it together and spearheaded it. I was tired from running around and promoting when it started so he and the others took most of that on. But it was dope cause we as DJ’s and musicians could do our thing with no restrictions. As it turned out so many other DJ’s have there own thing that they do that is more of there own whether it be live beat sets with MPC’s, Ableton Live sets, Serato, Traktor, or vinyl. People have a chance to come out and show more of their true colors. The music is centered around experimental beats though the performers can roll with what ever their set is. We are happy that it is growing in popularity and that it was also a critics choice in Time Out Chicago Magazine.

S: Any Chicago musicians/producers you want to shout out? 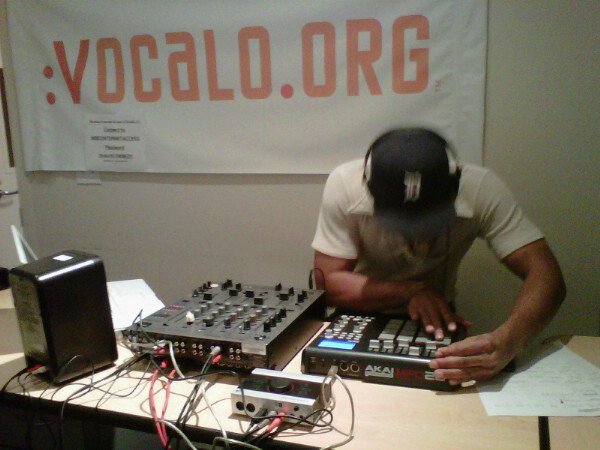