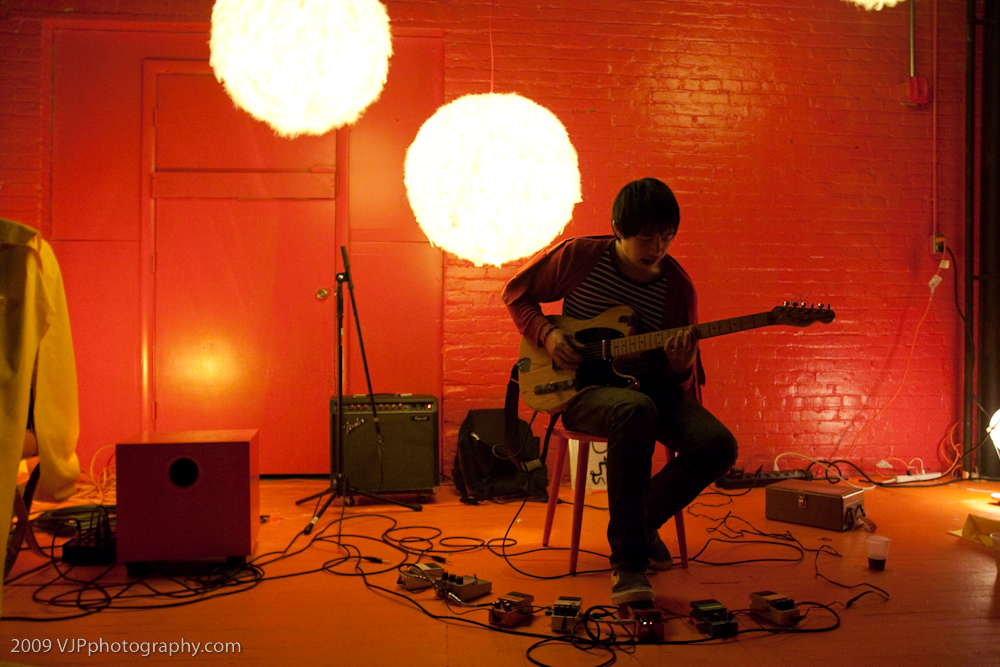 Dustin Wong and his minimalist setup.

About two months ago I had the good fortune of catching Baltimore’s own Dustin Wong at the Hideout. His minimalist setup consisted of just a guitar with a loop pedal and a few fx pedals. Now, loop pedals can be notoriously unforgiving evil beasts for a few reasons: one, it’s very hard to get long multi-layered sequences tight and natural sounding, and two, it is very hard to know when to stop layering, when to create space and simply enjoy the nooks and crannies of the loop. Despite these challenges, Dustin made it all look effortless.

Each layer would interlock perfectly and create interesting polyrhythms, and the timing always felt right. Just when things were building to a precarousily dense climax - BOOM! - he cleared the slate and started a fresh line, forging a new path and beckoning the listener to follow. The fluidity of his performance was impressive and the melodic variation and emotional content stayed elevated throughout the night. Dustin talked to us a bit about his background and creative process, his experiences playing solo vs playing in a band, as well as his most recent album, Infinite Love.

SOAPBOX: How did you first get involved with music?

Dustin Wong: I started playing guitar when I was 15. I attended this international school while I was living in Japan, it was called the Christian Academy in Japan. There were a lot of American kids, their families being missionaries - it was a very conservative Christian community in the middle of Tokyo, which was kind of bizarre. You know you’d have these weird things like every Wednesday you’d have chapel and hear somebody talk about their faith and I guess it was all starting to feel really crazy when I was about 15. I started listening to punk and formed a band with friends - it was a terrible band… That’s how I got started.

SOAPBOX: Did your band have a name?

DW: [laughs] Yeah, but I’m kind of embarrassed to say it.

SOAPBOX: [laughs] I understand. How long ago was that?

SOAPBOX: When you were learning guitar did you get a lot of formal instruction? Or are you self-taught?

DW: No I didn’t take any guitar lessons. But you know, some of my dad’s friends would come over and show me a few chords, how to play an E or an A or something, and then I’d play those chords for weeks. And then I started figuring it out on my own - it all started with shapes. It was helpful for me just because I was more visual. I’d try to think, “Well, what does a square sound like, versus a rectangle? What does a triangle shape sound like on the fretboard of the guitar?” It started out very chaotic, like I’d put chopsticks in between the strings to see how that sounded. But as I got older and played more, it all started to click more.

SOAPBOX: It’s interesting that you are self taught, and started off playing in a punk band…how did you get to doing more intricate polyrhythms, stuff that really reminds me of a lot of minimalist composers like Steve Reich?

DW: Yea, I was getting introduced to those types of artists when I was in college. As I started writing music with other people, we were definitely trying to push ourselves in understanding music. Before Ecstatic Sunshine I was in another guitar duo with a friend, and you know it would take us months to write one song, just because we didn’t understand how music worked. It was all based on what we felt was right. I learned a lot from that, just listening back and understanding the actual construction of how music works.

SOAPBOX: In terms of the compositional and performance process, how does it feel to do a more solo project vs playing with bands?

DW: In the band setting, with my experiences writing music with other people, the song structures would have a rare repeat of musical ideas. We’d start with one idea, go to another, go to another, it was never an A-B-A-B pattern or structure. So all music made with bands, it was a very horizontal direction where the song would start and go somewhere. With solo music it’s all about loops so certain ideas are constantly repeating and I’m layering ideas on top so that the musical direction is vertical versus horizontal.

SOAPBOX: Can you describe your live setup? Is that sort of how you came about doing looping, the limitations of performing as a solo person live or was it the other way around?

DW: It’s all the same tools I’ve used with Ponytail, it’s the same pedals - tuner, octave pedal, distortion, delay, looper, envelope filter and another delay. It’s just that the approach has changed. It was something I would do privately at home where I would loop things and layer things on top, and it was more of a therapy thing. With Ponytail it was more about how many sounds I could play in succession.

SOAPBOX: How do you feel about your relationship between the performer and the audience?

DW: It seems like people like to sit down when I play solo versus Ponytail where people will be standing. There is definitely an introspection playing by myself just because it feels like I’m bringing a part of my home to a show, so I’m just kind of in my own space wherever I play. I feel with Ponytail it was more bare and open, almost like a sacrifice, and playing solo feels more like an offering.

SOAPBOX: I know you have a film background too…

DW: Yeah, I studied film out in California.

SOAPBOX: Is film or video something you’ve thought about incorporating in your live shows?

DW: I’ve thought about it. I don’t know - um - it might not be like a regular thing where I’d have a video with me every show, but maybe a special show where I make a more of an installation where I have multiple projectors.

Sadly, the tape recorder cut off here. I talked with Dustin a bit more about the music scene in Baltimore and his positive experiences being there, as well as the meaning and inspirations behind his latest record, Infinite Love. A concept album, Infinite Love features a “brother” and “sister” version of the same piece. The siblings start and end in the same place but take independent journeys in the middle, allowing the listener to choose their experience. The name is inspired by a psychedelic vision and the music is intertwined with so much symbolism that it almost has a literary quality. To top it off, each version is bundled with a visual accompaniment on DVD. Infinite Love is available now through Thrill Jockey records. We hope to catch up again with Dustin soon as he continues to tour and work on new projects.