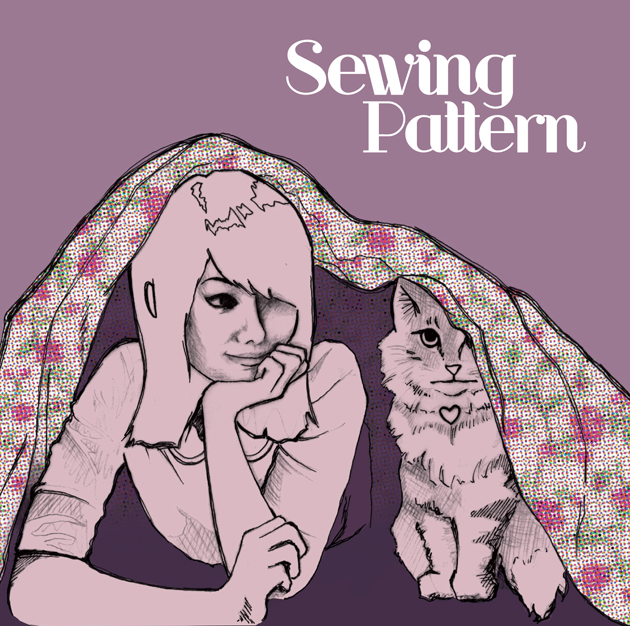 In this town of cold, dark and long winters, resignation and bitterness can sometimes begin to creep through the gaps in even our best armor. In the face of this assault, a little Sewing Pattern is the perfect defense. Sewing Pattern’s Angie Ma radiates an unabashed enthusiasm for music, creation and giving that shines through at every performance. Whether playing keys for local band Canasta or taking center stage in Sewing Pattern, Angie Ma makes her audience feel right at home – like we are all close friends, each receiving a special gift. And we are. And what’s more, the music is top notch. She took the time to talk to us about fashion, sexy swooning voices, Charlie’s Angels, and her sketches. Catch Sewing Pattern next on 6/3/2011 at Schubas, opening for Danielle Ate The Sandwich. 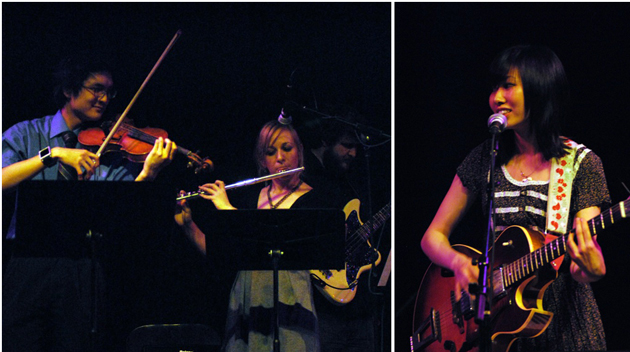 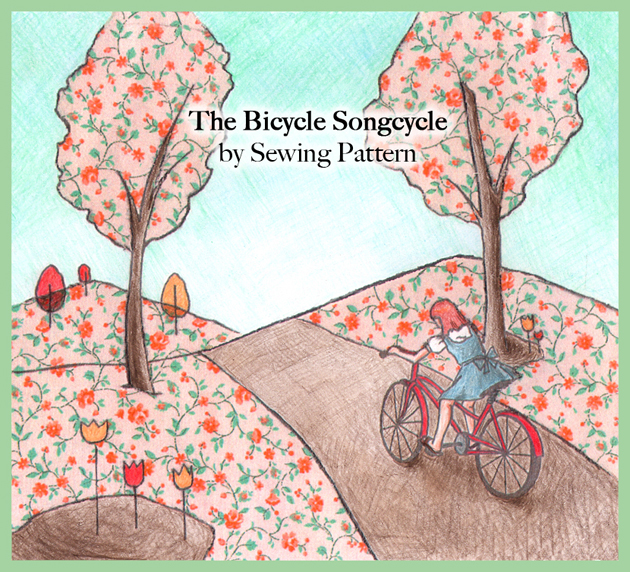 Soapbox: How did you first get involved with playing music?

Sewing Pattern: I was forced into piano lessons at age 5 and for the first 3 months I didn’t understand what on earth anyone was instructing me to do. When the notes on the page finally clicked with the sounds that were coming out, I was in love with piano lessons up until about age 13, when teenagers start to want different experiences! When I got to college, I started picking up guitar and piano lessons again, then jazz and composing, and became immersed as a music major.

Soapbox: You’re a multi-instrumentalist. Do you gravitate towards any instrument in particular when you start writing?

SP: When I first started writing songs, I always wrote with the guitar, I think just because I figured it was easier to travel with. But as my knowledge of theory progressed, I moved to the piano. To me, it feels like all the notes are laid out so equally, so you have more of a chance to attempt playing something different and weird, outside of your comfort zone. On guitar, I always seem to gravitate towards chords and progressions I know have clicked together. I’m not as adventurous. And becoming stale in chord choices is the one of the bigger fears I have….

Soapbox: The songs on both your albums are thoughtfully scored for a larger ensemble – you mention Burt Bacharach and Motown as inspiration in the notes to your eponymous second album. What draws you in particular to those sounds?

SP: Those were always the songs that I loved hearing the most on the radio, and that I felt the most whilst listening. Those songs are so grand and emotional from all those strings and horns of the orchestral sphere, yet when they’re juxtaposed with the heavy, reverbed drum beats (and tambourine and triangle!), plus the punchy bass lines and guitar of the modern era, and finally those sexy, swooning voices singing about teenage love, oh it makes me want to flip a table, it’s all so exciting! It’s the most euphoric feeling to listen endlessly with headphones on, trying to zoom in and out of those dense arrangements and take it all in.

Soapbox: Do you do all the arranging yourself?

SP: Yep, it was just me and Sibelius spending many nights together for a few months. For the first album about bicycles, note for note was written out for every instrument. For the second album, while everything was arranged, the drum and bass parts were more like looser guidelines as to what could be played. Therefore sometimes my drummer and bassist would play exactly what was written (like when my bassist took to the bass line that was written as a guide for “Boats Are For Friends”) or, sometimes I would tell them to try ornamenting the arrangement more, and because they are scarily adept musicians, they would whip out sessions beyond my imaginative capabilities.

Soapbox: You performed as a trio last year at Heaven Gallery and then again recently at Old Town School of Folk Music as a much larger band. How do these performing experiences compare?

SP: It’s definitely like getting to have icing on the cake, which is how I feel when there is anything larger than the trio of a rhythm section. That’s where the whimsy of these songs can start to arise, and where I feel very blessed to be able to have a group of people that size come together to play – because much harder than arranging notes is the task of arranging schedules and availability of people. But I will always just take the number of people available for a show and adjust the arrangements of each song. That’s the beauty of songs, that they can come alive really with any amount of people present at a time, given a bit of creativity and preparation. However to be honest, once it’s showtime, I can’t hear a single thing that’s being played by the band, I’m just worried about not messing the whole thing up on keys and vocals. But I do hope it’s more delightful, comparatively, for the audience…!

Soapbox: You’re providing music for Chicago fashion event Chez Mignon: A House of Pretty Things. Are you writing original music that’s connected aesthetically to the event? If so, could you tell us about that process?

SP: Writing music for Chez Mignon was so much fun not only because it was for my friend Michelle Dimitris’s [of Dollparts] event (she was the lead designer as well as the curator) but also because it was a character study of her fashion. Her workshop actually sits in the living room of our apartment, so I get to see her on a daily basis as well as witness her clothes being made. Her pieces are always so pretty and dainty (and never too flashy), but she has a hidden humor that comes out of her clothes and vintage collections as well, which contain a lot of 70’s and 80’s quirkiness. Therefore for the show, I wanted certain motifs and sections to be present: a sparse Chez Mignon theme that should hold curiosity and an old-time French feel within it; one section that should envelop modern, quirky style and french pop; one section that is full-out romantic and feminine (I aimed for Charlie’s Angels); then pretty much light disco from there on out! The process was harder than I thought it was going to be, actually, because the parameters of runway music – traditionally, that is – are kind of strict and very necessary: It must be in 4/4 or 2/4 so that the models can walk. It should probably all sit at the same tempo as to not confuse the models in transit or the timing of the show. It should be upbeat, as a runway show should do its best to capture the liveliness of the clothes. And it shouldn’t really embrace the dramatic highs and lows that a song or album can have, as it wouldn’t be fair to give certain articles of clothing less of a chance for liveliness than others. All in all, it was such an honor to get to face such obstructions and write such fun music! I plan to record the piece (it’s about 15 minutes long) and share it on my website this summer.

Soapbox: If there were one thing you could change about the state of music in Chicago, what would that be?

SP: I would change how competitive bands feel they need to be about their music. It’s so beautiful that everyone is writing songs and hosting eventful nights for each other, and it makes me sad when it gets tainted by this race for more press, more bragging rights, more fans, and more success. It’s a vicious cycle that rarely leads to any sustainable contentment, and I wish that everyone’s expectations leveled out at being happy to make and share things with friends.

Soapbox: Do you have other creative outlets beyond Sewing Pattern?

SP: I very much enjoy cooking for my apartment and for my love; this last week, we made butternut squash risotto! I also get to play keyboard for the band Canasta, and have two gigs today: a festival at IIT as well as a brief musical interlude for 2nd City’s “Late Live Show”. I have been reading as much as I can lately, and am currently reading “Sabbath’s Theatre” and the “The Illiad”. I have also picked up the habit of sketching things and calling it “taking a picture”.

Soapbox: What are you working on now? What can we expect next from Sewing Pattern?

SP: I have been looking forward to thinking about my next project for SO long! My next album is going to take a lot of time and research, so it won’t be completed for 3 years, I imagine. But the plan is to make an album that goes along with a comic book of my creation. I’m still planning the topic of the project and don’t want to say too much, but it’s so exciting that I must read a lot of books and comics in order to prepare for it, as I’ve never really told a big story before! Songs are really more like vignettes, where you’re never expected to delve that deep or conclude anything. This is a new skill that I’d like to learn much more about. In the meantime, however, I do have many other small recording projects I’ve been dying to make!