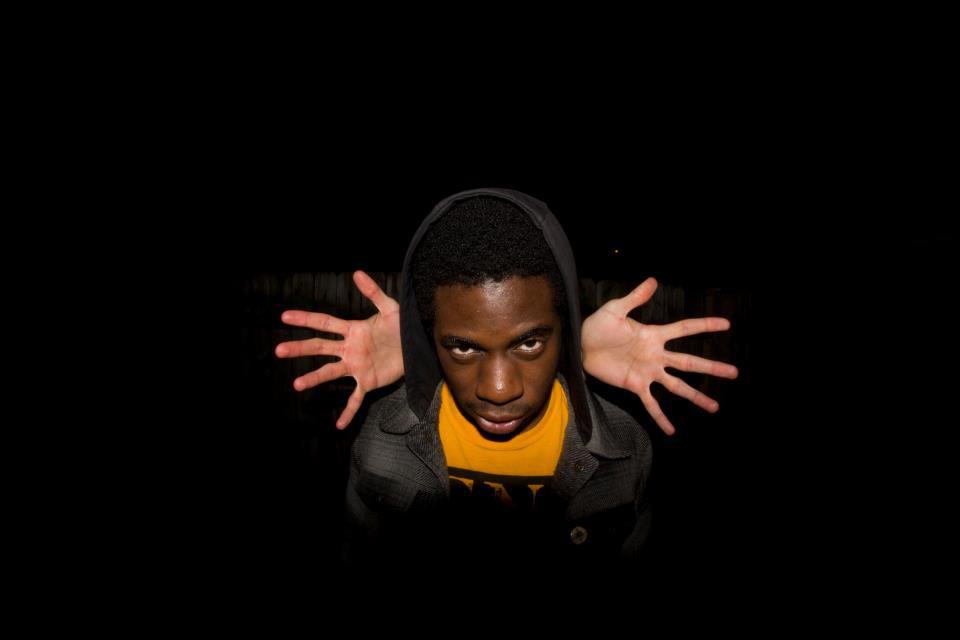 About a month ago, I stumbled across Nnamdi Ogbonnaya after reading a post on the venue & studio space Space Jam Chicago’s facebook page. A few minutes later I was listening to Nnamdi’s bandcamp page and was sort of locked in a dizzying mind spiral for a few hours trying to understand what was happening. What really grabbed me was the raw energy and musical exploration I was hearing. It was the sound of an artist who devoured and absorbed a wide range of music and was fearless in expressing himself in any way possible. Every song is different and can be delicate, complex, serious, harsh, simple, silly, weird, and everything in between. Finding out that Nnamdi was a member in a couple of other bands including the Para-Medics, I was officially intrigued.

A few weeks later I started reading a bunch of stuff about Swerp Records, which is a new record label highlighting bands from the south suburbs of Chicago. Bands on the label include The Para-Medics (video), Water House, Freudian Slip, Ratboys, Nervous Passenger (video), jt royster, and Nnamdi’s Sooper-Dooper Secret Side Project (video). I had never heard of any of these bands before but after listening to their soundcloud sampler reel I knew there was something special going on here. There is an unusually high percentage of awesomeness, and I found that the ambition and energy apparent in Nnamdi’s music extended to these other bands.

Over the years I’ve been lucky to be a part of a few small-yet-energetic music communities that grew from just a few friends hanging out sharing and making music. Friends that support, encourage and challenge each other to put out new music, and to be as creative as possible. Creative ideas bounce around wildly, each idea spawning a dozen new ones and everyone feeling inspired and part of the community, even those that aren’t necessarily making music. The energy propels everyone forward, ripples farther and has a greater impact than anyone involved ever expected. Memories are made, and the energy is carried out in a diaspora as individuals travel to new locations and meet new people.

Swerp feels a lot like that. I really like their energy and vibe, which is why I wanted to interview Nnamdi and get some more info on the new record label. I feel like these bands deserve all the attention they can muster, so take a minute to check out their music and buy their records. By the by, Swerp Records officially launches May 22nd, 2012 but for now you can follow them via their Facebook and website.

What is the story behind the name Swerp?

Honestly I just like to make up words and funny sounds. People think it’s creativity but it’s really just me having a very immature sense of humor. Maybe it’s a little of both. I like to tell everyone a different story about what the word means so everyone is confused with all their different stories. Regardless of my intentions, my friends took it and just started using it to describe anything, using it as a greeting, chanting it at shows. It kinda grew into this cool thing with connotations of badassery surrounding it.

Who runs the label? How did it start?

The record label was started by my friends Nix (Matthew Nix) and Dragon (Jonathan Mondragon). I know that I and a lot of other people wanted to start a collective of bands, but every way we tried to approach it just didn’t seem to line up with our original intentions. Basically, we all knew that we have all these friends in awesome bands that we know are really cool and that other people will dig but it seems like no one gets past a certain level of exposure. [Whether it’s] from getting discouraged or just [being] bored with the same shit, a lot of really awesome bands dwindle away. I think Nix finally said “Screw this.” He has always been super supportive of local bands and he sees potential in places where others are too ignorant [to see]. The both of them got together and just decided that they want something different to happen, and they want to do it right so they did it and we are all super hyped.

Why a Chicago South Suburbs record label? What suburbs are represented?

What is it like to grow up and play music in the south suburbs? What are the advantages and disadvantages?

For me it was pretty cool. My neighbors never complained when I would be drumming in my garage for hours at a time and I know they had to get at least a little annoyed. I would have, but they were chill about it. Sometimes little kids would just walk in our garage and watch us practice too. In winter I had to move my drums inside which meant I got to play less. I’m pretty sure I was completely oblivious to the music scene until I was actually in a band, but there are some really good bands that came from where I’m from. One of the bad things is that there were only like two venues in the area. Being a teen without a car we didn’t have many options. Those places got kinda played out so we decided to start having shows at my friend Shaun Burks house, and when he moved the shows migrated to my house. I know my friend Tommy had occasionally been having house shows for a while before that, but like I said I was pretty oblivious to what was going on musically until I started doing it myself.

Do you have a desire to connect and expand with the city of Chicago or other suburbs? Do you identify with the wider Chicagoland area? The Midwest?

Yeah dude. Expansion is the key. Personally, I’m always looking to make music with different people. Even now I’m in a few bands that aren’t on this label. We are always up to connect with new bands and artists from anywhere. I’ve never really felt deeply connected to any area, the interesting people is what sparks up any feeling of connection that I have with any area. In that regard, the midwest is dope because I know the most people here. As for the record label, I’m not sure if they will be adding more bands anytime soon, but definitely in the future when things start settling in.

Can you give a brief overview of some of the artists on the label? There appears to be a diverse range of styles represented. I also notice a few members (such as yourself) play in multiple bands.

Yeah I’m in The Para-medics, Water House, Nervous Passenger and of course Nnamdi’s Sooper Dooper Secret Side project. My friend Brendan Smyth is in Nervous Passenger, Water House, Freudian Slip and he also plays in my project. The reason I’m in multiple bands is because music is the only thing I enjoy doing so I have made sure I get to play as much as possible. Brendan is an alien drum wizard and everybody wants him to be in their band. The groups are all really different which rules. They are all cool in their own way. The Para-medics was the first band I was in that started in highschool as a two piece between me and Dylan Piskula. It’s just fun instrumental music that people have labeled as Math Rock. Ratboys, who is folky and just has great warm vocals, is one of my favorite bands. I wish I was born a girl so I could sing like Julia. hahaha. Freudian Slip to me is the perfect mix of zany, poppy, and catchy. I legitimately love all the bands on this label which is awesome and I don’t think is the case for most artists on any label.

What is your connection to the punk / diy scene?

I go to shows. I have lots of friends in bands. I know some vegans hahaha. That’s about the extent of my ‘scene’ knowledge. But honestly, I just love music. I may play in a punk band, or start a rap project but it’s all strictly just for the enjoyment of making music that makes me and other people happy. I’m really not super into scenes, all though I do support getting involved because there is a lot of cool shit happening. All I’m saying is people shouldn’t limit themselves into one small category because then they miss out on a bunch of other really neat things.

What is the ultimate goal and vision for the record label? What do you hope to achieve?

I think the ultimate goal is to just promote and support these artists in whatever way it can to the best of its ability and hopefully have these artists start getting a lot of people that love these bands as much, if not more than we do. It’s also trying to get people into something new and unique, and I think we are all eager to make this all happen.

If your record label was personified as a sea creature, what would it be? What would it eat?

Now here are the questions I like! It’d be a Sea Moose with octopus tentacles and gills for eyes, it’d only eat the pickled toe nail clippings of Paul Reubens for main courses and for its annual dessert it would eat the parents of whichever Vienna Boys Choir member is the runner up in a game of musical chairs. Oh. And it would drink Sprite.

Go add the Swerp Records facebook and check out Swerprecords.com for more info. Thank you anyone who checks this music out. We really are psyched when people message us or talk to any of us, so do that. I will hopefully be touring a lot within the next three months so look out for that. On July 22nd we have a giant all day show of cool bands around our area. It is called “The Big Show” and it’s usually in Matteson, IL. Other than that, thank you and everyone just stay positive.